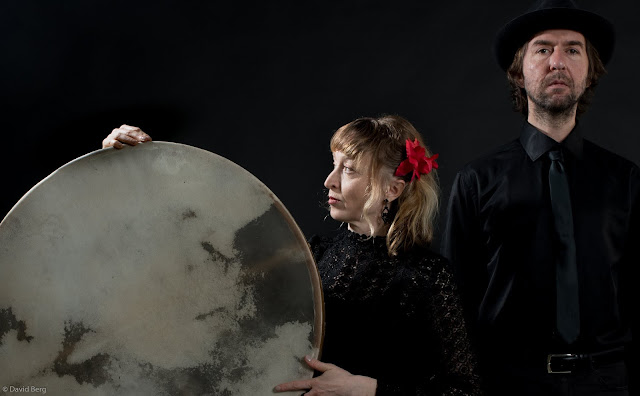 "A journey home"
Ballades of the East, a piece of original music by singer-songwriter Martris and in collaboration with the pianist Rudjer Glavurtic, is a World Balkan music with piano and voice. In Ballades of the East through her poetry and melodies, through her writings and art, Martris is searching for identity and belonging. A deeper belonging that explores its culture of origin while at the same time questioning it in order to transcend its boundaries in the search of universal truth and understanding.

“A mystical musical journey through myths and tales”
Ballades of the East is a multifaceted project that in its starting idea wishes to capture the essence of the culture and the music from the Balkan region. In exploring the “traditional” and moving further away from it, Martris and Rudjer are creating a unique twist of their personal interpretations and styles.

“Fairytales like songs with Eastern European melancholy”
Martris: “People usually think of happy wedding music when they think about Balkan music here in Western Europe so this might come as a bit of surprise. Our music has the flavor of classical and film music, sad gypsy songs, ballads, jazz improvisations, and fairytales. It can be sad and deep at times as Fado and invigorating and intense as life in the Balkans…there is a lot of East European melancholy in it”

Ballades of the East is the title of a lifelong process, I am not sure when it actually began. Maybe it was there from the very beginning. From the first breath that I took, the melodies began to enter... into the layers of my skin, into the cells of my lungs, into the arteries of my newborn heart. My songs, imploring me to sing them, demanding me to listen to them.
The East, as an approximate place, means to me the East of Europe. A home. The moment I began to breathe, to look around, I became a member of that approximate yet clearly defined world. I became them. I became the confinement of unspoken words, the silence of my mother's cry, tears condemned to solitude in the dungeon of my father’s tormented heart. I felt the unbearable pain of existence from a very young age. The pain of people craving to be loved, people secretly longing kind words of encouragement and warm embraces of unconditional acceptance. I became the anger and the blame of people demanding to always be right. People who feel they can take what doesn’t belong to them and push others aside as if they are faceless paper dolls, relying on the right that is always given to them. I became the despair and the loneliness of the silent victim that I could see in every face I passed. The victim sneaked in without me noticing and became the full legitimate resident of my newly-adult body. I shied away from people throughout my young years, drawing the faces of people without lips during my art classes. I couldn’t speak out openly, but If I did, I would howl, I would scream until there was no breath left in me.
And all those residents of my being, those faces spinning in a circle, they spin as if they were looking for some kind of way out of their loneliness. Sometimes they would all stop. Under all that noise, the words of my residents, all shouting at each other at the same time, there was something demanding to be revealed, to be talked to. It was like the silent whisper I could hear in the stillness near the river, far away from the mass delirium and the crowds radiating fear. If I could feel the movement of my breath throughout my body and the beat of my heart in my chest, I would feel at ease. In those moments it was as if all that pressure would release as if all those faces could relax as if they could feel they were not alone... as if I could feel that I was not alone. An in that moment I would finally be able to reach out to all those faces – spinning in a circle of eternal suffering – and welcome them in a gentle embrace as dismissed images of myself. Then, while I was embracing them, I would begin to feel loved. Taking a long breath in, falling into the embrace of self-acceptance, I would be able to hear again the melodies of songs about to be born.

It’s mesmerizing to watch the river flow, continual liquid moving mass without a beginning or an end. As I stand and watch her move graciously, I become aware of the movement within my own being. The freedom held within the invisible walls of my fears. The fears engraved into my psyche that leave me breathless as I witness the internal war inside. How does it feel to live without fear? How does it feel to surrender to each moment anew without expectations as to where they might lead me? Is it even possible?
As I watch a drop of water, defined by its own boundaries while at the same time fully merging with the river mass, into her endless flow over and over again, a thought enters my mind. How would it be to let go of every meaning that defines my sense of selfhood? What would I be left with if I let go of all labels that define my sense of belonging or possession?
The labels: my name, your name, our table, my home, your hand, my country, your country, this pain, past wars, our enemies. Imagine if the words no longer had any meaning. Would we be more like a river? A continual, liquid, freely moving mass without beginning or end, for a moment, experiencing the joy of separation. Surrendering to the experience of the label: I am. Jet fully dropping the label down into the mass, over and over again. As if it were a fun game to play. As if there were nothing else to do but that.

This is a day like every other. This is a day that I wish would not end! This day I savor, I devour, I kiss, I dance to. On this day I wish you would not stop singing your song. Your voice is calling me to tears, asking my heart to open, my feet to surrender to the muddy earth. Oh, it feels divine to touch the dirt mixed with rain, with forest leaves, with the whispers of the grass and sounds of the church bells, interwoven within each pore of the rotten leaves and the memory of every person who has walked this path before me. Oh, it feels so simple and yet so right to walk over the rocky road, painfully absorbing it stone by stone, as I follow the path with no expectations as to where it might lead me. I hear your voice again. Is it too much to ask? Would you sing to me until I close my eyes? This is a day like every other. Yet I wish it would not end.

In our human nature, a transformation from one phase to another has the potential to bring forth powerful growth. During that process of transforming we are not usually aware that we are about to embark on a journey toward something new. We often feel the fear of losing the known parameters of our known identity. Everything we used to perceive as I, mine or ours begins to dissolve. Intense periods of doubt, fear or anxiety can take over our consciousness, while not yet visible changes in our internal and external environment are taking place.
Morana is a symbol of such a change. Goddess of death and transformation in the Old Slavic mythology, she stands for an ending – of a season, a period in one’s life, or life itself – and as such she brings us into the initiation of something new, something not yet visible.  She faces us with the choice. Do we embark upon the journey weighted with the fear of losing everything, or do we walk forth celebrating and rejoicing the steps we are making? Growing awareness from “I am only this body” to “I am consciousness being aware of the body,” Morana brings forth transformations into the deeper mysteries of life. She challenges us to walk without knowing where and what awaits us on the other end of the road. To simply trust and take one step at a time. To surrender into the ever-present now. She calls us to embody, taste, and fully sense every moment of our life, every emotion as if it were our last, and with that, she challenges us to develop an appreciation for the most mundane encounters and daily routines.

It is been quite a while; I am not sure how long. Here near the salty water, in a sleepy village near the mountain, time is counted in the pulse of waves and the returning of the wild sea storms. Here, near the salty water, you can find me in the crevices between the rocks, in an interval of life stillness. Sometimes I’m standing and counting the waves, sometimes I’m counting the breviaries of seagulls as they descend and rise majestically in a never-ending play of survival instinct and breathless surrender. Yet, sometimes I await the pulse, the pulse of the wild sea storm.

It has been quite a while now, as if everything around me is waiting, resonating in one inhalation, in a perfectly orchestrated build-up of tension. “We are expecting! We are hoping! We know it's on the way. We feel it in our veins!” The pause before the grand pulse is about to end! The pulse that reverberates throughout the whole village, throughout every cell of every body, seagull, and human alike. The pulse that is terrifying beyond all measure yet deeply awakening, calling us all into an awareness of the modestly banal yet truthful three-word sentence:  We...are...one.

***
It is quiet again. The storm has ended. A crystalline liquid turquoise pulse has entered my veins, my blood. Another measure with which to count our separate existences as we fall asleep, into a new pause and a new waiting.

There are days when I'm longing for the color green. Not just a color on paper, but a green enlivened by the wind and carried by the songs of the birds. The green that smells of the fertile soil and trees after the summer rain. There are days when I'm longing for the sound of the river. For the sound of her gracious flow, without beginning or end. As I close my eyes, I slowly sink into the memory of a murmur. The murmur of waves hitting the rocks in an endless tonal variation, forming a perfectly organized hypnotizing clamor. Then, as the clamor becomes louder and more real, I become aware that everything is precisely the way it is supposed to be. I become aware that I have arrived at the right place. That I am home.

Martris · Kraj Reke /By the River by Marina Trisic martris